In a series of works conducted in the past three years, I have been attempting a response to the destruction of the city of Christchurch, a micro-Odyssean journey which has been conducted from my current home of Dunedin. This has been both a response to the fragmentation of material history and memory, and an investigation of how mobile radio can become a way of translating the city, itself a form of mobile architectural intervention.

Radio is a slippery medium, at once ephemeral and wholly tactile, itself historically implicated in holding and giving away of memory and the dis-connecting, and re-connecting of people. I have been, in these and other projects, conducting radio art as ‘fieldwork’, a type of investigative process of material and physical histories. I have done radio transmissions which explore, through field recording and narrowcasting, the architecture of the inner city spaces of the red zone, and the suburb of Bexley. 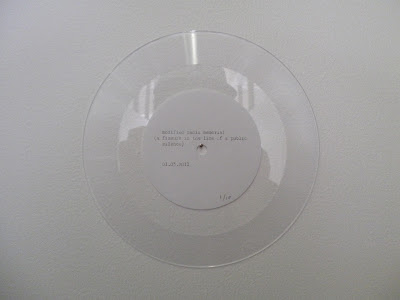 Object based works include modified radio memorial #1 (a fissure in the line of a public silence), an edition of locked groove lathe-cut records pressed with the two minute radio silence broadcast a week after the earthquake of 2011, and educed city symphony, acts 1-7 (songs for old dungers), a series of photographs of antique symphonion music box discs, with audio ‘soundtracks’. the device which made these discs audible was destroyed in the earthquake, when the c. 1830s machine which they belonged to, which is the only thing that could play them, was bulldozed as part of the contents of the Blue Kiwi antique store.

In material form, these objects become unplayable files, their histories resigned to obsolescence, but digital technologies of playback render them re-audiblisable. The actual material of these discs is infiltrated in the ‘soundtracks’ by material from oral histories on tape of my great grandmother’s reminisces. Her name was Ann Wright, and she was 102 years old when she died, having lived in Kaiapoi all that time. The oral histories were lodged at The Kaiapoi Courthouse (latterly the Kaiapoi Museum) was deemed structurally unsound after the September 4 earthquake and was demolished over several days from 10 September 2010.

I would like to explore in a presentation how these works conduct an investigative process that explores memory, history and the city, the idea of public space, and the memorial. They also widen out in scope to include the entirety of the country, such as a collaboration with Dunedin Based artist Kerry Ann Lee, with whom I am currently working on a collaborative project exploring cultural heritage, recording and memory as the family business of her childhood years in Wellington is marked for demolition by earthquake strengthening laws, and related Dunedin based works with other artists.

Image of ‘modified radio memorial #1’ lathe cut and accompanying text in the exhibition ‘simulcast’ at the Audio Foundation 2013: